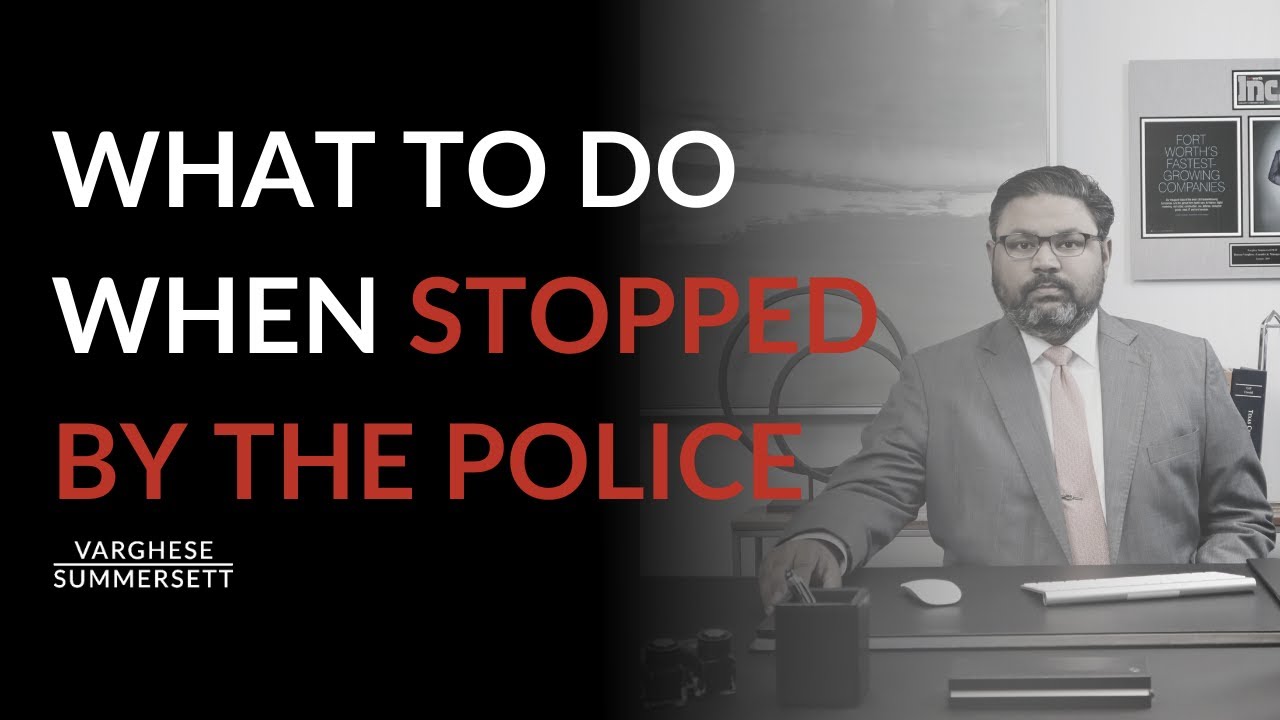 Video: What to Do When Stopped by Police

Being stopped by police can be a nerve-wracking experience. In this video, VS Defense Attorney Benson Varghese explains your rights and answers frequently asking questions.

Benson Varghese:
Here’s a challenge, ask five of your friends whether they believe Miranda warnings are required upon arrest in Texas. And if they get it wrong, be sure to send them this video. How you respond after an officer stops you can make all the difference between an arrest and not being arrested, or even a conviction and not being convicted. Let’s talk about your rights, your responsibilities, and some practical tips if you’re stopped by a police officer in Texas. Your responsibilities after being stopped by a police officer in Texas are defined by the nature of the encounter.

Let’s put aside traffic stops for a moment where you’re the driver in any other circumstance. Let’s say you’re a passenger in a vehicle, or it’s simply an encounter you have with an officer on the street, on a sidewalk, in a store, or on your front lawn. There’s no general requirement in Texas for you to identify yourself. So if you’re talking to an officer and they ask for your identification, you do not have to provide your ID or your name, unless you’re placed under arrest, at which point you must identify yourself.

A mistake and an offense in Texas is called failure to ID by falsifying information. Is a person lying about who they are? And that can happen at any point during the interaction, not just after the arrest. So mistake and illegal to lie about who you are, but it is not illegal and you have no active legal duty to identify yourself if you have not been placed under arrest. Now, the workaround when we’re talking about vehicles and drivers of vehicles is officers can ask for a driver’s license and proof of insurance.

Now, the law isn’t really intended for them to identify the driver, but certainly that’s what they’re doing when they’re confirming the driver’s legal permission to drive. So if you’re driving, you do need to have your actual license on you. That’s really where your responsibilities end in Texas. If you’re a driver, you provide your driver’s license and insurance. If you’re not a driver, so you’re a passenger or any other person, you don’t have a duty to identify until or unless you’re arrested.

Beyond that, and my second tip, is you do not have a duty to provide information, so be silent. But before I delve into that second tip, I want to give you my third tip because they’re really tied together. My third tip is be polite. Be silent, number two. Be polite, number three. Here’s why I say they’re intertwined and here’s why you should use your right to remain silent judiciously. Let’s say you’re coming from work, you’re going home, and the police officer stops you for speeding.

In that scenario, you know the worst possible thing that could happen to you is you’re going to get a ticket for speeding. By answering the officer’s questions, where were you coming from, where were you going, do you know why I stopped you, politely might result in a situation that is diffused and an officer giving you a warning instead of an actual citation. Do the things that you can do to put the officer at ease. Address the office politely, good evening, good afternoon. Be mindful the officer is walking into a situation that’s an unknown for them.

They don’t know you. Most likely. They don’t know if you’re armed or what type of situation they’re walking into. So do what you can to alleviate that. If it’s dark already, turn on your overhead or your dome light. Put your hands where the officer can see them, 10 and 2 on the steering wheel. Roll down your windows before the officer approaches. Do what you can to be polite and put that officer at ease, because that’s going to increase the likelihood that you’re going to get out of that situation with a slap on the wrist.

Now let’s change that scenario a little bit. Let’s say on the way back from work, you stopped for happy hour and you had one or two drinks. Well, now when the officer stops you, you know it’s not in your best interest to answer questions. So you’ll still provide your license and insurance, but you’ll do as little talking as possible. You could even say, “I have a friend who’s an attorney who’s advised me to not answer questions if I’m asked during a police stop.” That’s a perfectly acceptable answer. You could say, “I decline to answer any questions.”

It’s a little premature to say, “I’m requesting an attorney,” because you don’t have a right to an attorney at that point, but you’re still getting the message across that you don’t want to speak to the officer or provide any information. Your silence alone can’t be held against you. But an officer, let’s say they were suspicious of you driving while intoxicated, is going to continue their investigation. That leads me to my fourth point, don’t do anything that’s not required of you. Again, be polite about it.

But when the officer asks you to step out of the vehicle, you should, because that is something that’s required of you. Going beyond that and doing field sobriety tests is something that you can respond with, “Do I have to do that? Am I required to do that?” The reality is, you are not required and the officer cannot compel you to do field sobriety tests. Again, politely declined to do tests. You can say, “I don’t trust those tests, or I wouldn’t be good at those tests.” The officer is then potentially going to ask for breath or blood.

And those steps not only lead to more work and potentially more mistakes that the officer is going to make, but it also means that on rare occasion, the officer might decide they’re not going to go through with the work. There just wasn’t enough there for them to articulate to a judge that there’s probable cause to have arrested you and now believe that you have alcohol in your system.

Because if you followed my advice, you haven’t made any admissions, you haven’t said anything about where you were coming from, you haven’t done field sobriety tests, so what beyond potentially your driving behavior and the other common list of things they put down, like odor of alcohol, red bloodshot eyes, does the officer really have? So the less information you provide them with not only decreases your chances of an arrest, but also decreases your chances of a conviction at the end of the day. Here are some commonly asked questions about police stops in Texas.|

Is it legal to record a police officer? Texas is a one party consent state. That means you don’t have to get anyone else’s consent as long as you’re one of the people involved in the conversation being recorded. So yes, you can record a police officer who’s arresting you. Going back to my third tip of being polite and trying to put the officer at ease, it’s probably wise to do so unobtrusively. But if you’re asked, are you recording me, there’s also no reason to lie about it. Are officers required to tell you why they stopped you? No.

In Texas, there’s no legal requirement for an officer to tell you the basis for the stop. Now, it’s common for officers to come up to your window and ask you if you knew why you were being stopped so they can get some admissions. And oftentimes, they’ll tell you the reason you were stopped, but it’s not a legal requirement. Are officers required to read you your Miranda rights upon arrest? That’s probably the greatest myth relating to the criminal justice system.

So being in custody alone doesn’t trigger a Miranda and interrogating you alone doesn’t trigger Miranda, which means all of those questions the officer was asking you at the side of the road perhaps while you were still in your vehicle or even outside your vehicle are all fair game and fodder for future prosecution. Even though the officer never told you, he was essentially interrogating you and didn’t provide you with Miranda warnings.

If you have questions about your rights, responsibilities, or looking for some more tips about what happens during a traffic stop in Texas, drop your questions in the comments below. We’ll be sure to answer them. If this video has been useful, be sure to like, subscribe, and share this video with your friends. If you have been stopped by police and were recently arrested, it’s important to have an experienced aggressive attorney in your corner. For a free consultation, give us a call at (817) 203-2220, or contact us online. Feel free to check our website, versustexas.com, for more information. Want to learn more about our attorneys? Please visit our page Why Us and Our Team.