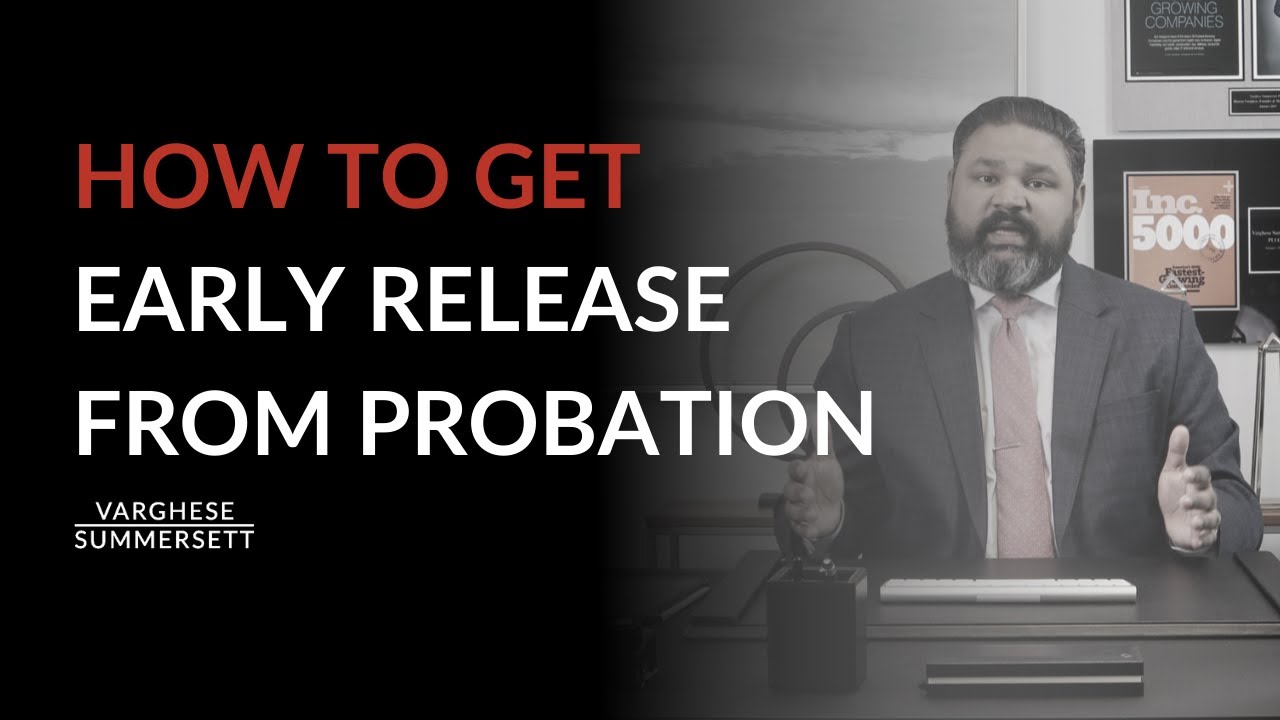 Video: Can You Get Early Release from Probation in Texas?

Can you get early release from probation in Texas? Defense Attorney Benson Varghese explains how (and when) it’s possible this video.

There are two types of community supervision in Texas, probation or deferred adjudication. In this video, we’ll talk about how to obtain early release from probation. Probation is a form of community supervision that is a conviction on a person’s record. The advantage of probation over deferred, which is not a conviction, is that your maximum penalty if you’re revoked is capped. So in other words, if you’re on deferred and violate, the judge has the entire range of punishment that he could impose upon you if you violate. Probation on the other hand is capped at whatever term you were originally sentenced to. So if you were sentenced to three years probated for five years, what that means is upon revocation, the judge can only revoke you for up to three years instead of what your original punishment range would’ve been. For example, on a third degree offense, two to 10 years in prison.

So if you’re on probation, you’re convicted, but there are some benefits. You can also apply for early release from probation. What this means is the judge has the ability in most cases to completely discharge you from probation. Doesn’t take away from the fact that you have a conviction, but it takes away from you having to report once a month and continue on with the conditions that probation or the court had laid out for you.

When you ask for early release, the first thing that will happen is the court probation officer will ask your field probation officer to generate a report about you. These chronological records will detail everything that happened from the first day of probation all the way through the date of your request. Everything they’ve asked you to do, everything you’ve done, everything you’ve failed to do. Generally, if you’re asking for early release, you will want to have completed all the conditions of probation that were asked of you, be [inaudible] on your court costs and fines, and also have paid for your probation fees through the date that you’re asking for early release.

The petition will result in this report being prepared, the report will go to the court probation officer and the court probation officer will make a recommendation to the judge. The judge may or may not set the matter for a hearing, but ultimately the judge will rule on whether or not early release should be granted. Again, if early release was not granted at your first request, you can wait another year and come back and ask for early release. In fact, you could ask earlier, but generally judges are not going to give serious consideration unless a significant period of time has passed. Generally, that’s going to be another year’s worth of probation.

Understand there are offenses for which you may not receive early release from probation. Those offenses are primarily intoxication related offenses, everything from driving while intoxicated, a first-time offense, all the way through intoxication manslaughter, or an intoxication assault type offense. However, an attorney can still ask for you to be placed on what’s called non-reporting probation. Once again, you’ll want to have completed all the conditions of your probation, be in good standing with your probation officer so that hopefully you get a positive result on a DWI. You obviously want to make sure there have been no violations of the interlock if you’ve had one on your vehicle or any allegations that you’ve been drinking during your probationary period.

If all those things line up, we can ask the judge at the halfway point to remove the interlock device from your vehicle. Statutorily, it’s only required up to that halfway point. And we can ask the judge to put you on a non-reporting probation where the only thing you have to do is stay out of trouble. And as long as you do that, you’ll be successfully discharged from probation.

If you have questions about getting off probation early in Texas, drop your questions in the comments below. If this video has been useful, be sure to like, subscribe, and share this video with your friends.

If you are in need of a criminal attorney, give us a call at (817) 203-2220, or contact us online. Feel free to check our website, versustexas.com, for more information. Want to learn more about our attorneys? Please visit our page Why Us and Our Team.